Your teacher will be filling this page with exciting class news, pictures of things we've done and more.
Do you have any ideas for this page? Why not let your Teacher know!
Have you seen the Kids' Zone? Play games and visit some cool websites. You can vote for your favourites.

We're so pleased to have received an amazing 2 trophies at this evening's Carnival Awards event - Outstanding Learning in Carnival and joint 2nd place for Best School Performance! The children were a credit to the school and gave some lovely acceptance speeches giving a special Thank You to Ms Moore for teaching them their dance.

We had an amazing time at the Luton Carnival today and didn't let the rain spoil our day. The children took part in the procession, wowed the crowd with their dance and were even met by a real Transformer!

Year 4 were out at Hazard Alley in Milton Keynes today and found out lots about keeping safe in a variety of situations that could be dangerous!

As we prepare to take part in the Luton Carnival on Sunday 26th May, our Year 4 pupils have started designing and making their costumes at the Carnival Arts Centre today. They've also been lucky enough to try on costumes from previous years!

To start this term's topic about the Ancient Egyptians, Year 4 have been on a treasure hunt and solved clues using hieroglyphics that they found around the school site.

Some of our Year 4 and 5 children went on an adventure at Chalk Hills Academy today and made new friends with some of the children from Chantry Primary Academy. They had to use a range of navigation and geographical clues to solve clues around the school site and had a lot of fun! 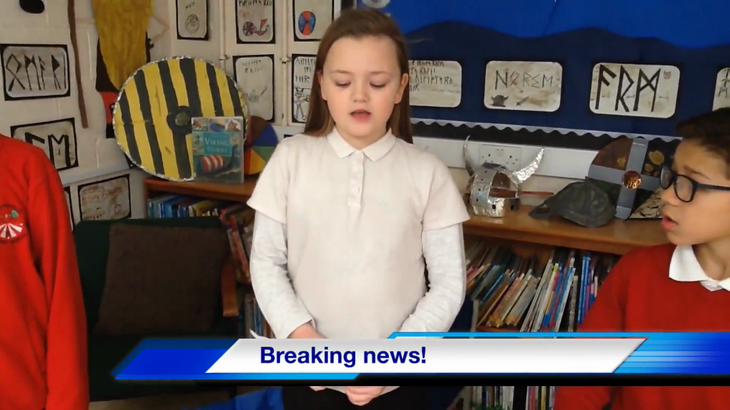 This morning, our Year 4 pupils took part in an interactive 'design a robot' activity. Children orked together in small groups, listened to instructions, showed creativity and thought about the different features of robot. We're excited when they get to think about how their designs can be used as part of this year's Luton Carnival!

Year 4 have been learning how to measure and convert centimetres and metres so, to help them, they made a paper aeroplane each and flew them in the hall, recording the distance travelled.

A group of children from Year 4 spent the day today at Stopsley Primary School at a Motivating Maths workshop. They worked as a team to solve a range of Maths problems and approached everything with a smile!

Continuing this term's topic, Year 4 have been investigating Viking boats. Using their information, they then went on to design a unique sail, use clay to mould their boat and paint it the correct colours.

Children in Year 4 had an amazing time when a Viking came to visit them after they had written a letter inviting him to school. They found out about what life was like for Vikings, what they wore, and what they ate. They also had a go at making their own Viking coins and learned about some of the weapons that they used.

As part of their work studying the Vikings, Year 4 children have been finding out about Viking Gods, designing Viking shields, and researching the kinds of clothes Vikings wore. They have also written a letter inviting a real life Viking into school - watch this space...

Thank you to everyone who came along to our coffee morning on Wednesday 12th September - the children performed brilliantly and staff were able to share what we are covering over the course of the year. You also helped us to raise lots of money for Macmillan Cancer Care!

Unfortunately not the ones with chocolate chips.

Some cookies are necessary in order to make this website function correctly. These are set by default and whilst you can block or delete them by changing your browser settings, some functionality such as being able to log in to the website will not work if you do this. The necessary cookies set on this website are as follows:

Cookies that are not necessary to make the website work, but which enable additional functionality, can also be set. By default these cookies are disabled, but you can choose to enable them below: