Your teacher will be filling this page with exciting class news, pictures of things we've done and more.
Do you have any ideas for this page? Why not let your Teacher know!
Have you seen the Kids' Zone? Play games and visit some cool websites. You can vote for your favourites.

The Book Club have just started a new book as their sessions at Chalk Hills Academy continue. They have been writing recommendations for others to read and are continuing to read avidly!

A group of children from Year 5, accompanied by Miss Scarry, Mrs James, Mr Kelly and Miss Pollard, spent the night sleeping on HMS Belfast in London. They arrived during the day and started their adventure at the Tower of London. They then headed back across the River Thames to the huge ship. They learned about what life was like for sailors, had a go at making semaphore flags and spent time exploring the length and breadth of the ship before settling into their bunk beds for the night. They were brilliant throughout and have made some lasting memories. Well done everyone!

Year 5 created some amazing constructions as part of their K'Nex challenge. Well done to Khalid and Adonis who won in Eagle class, and to Aimee and Sagina in Hawk class - engineers of the future

A group of children from Year 5 have been attending a Book Club at Chalk Hills Academy every three weeks. Today they started the next book in the Series of Unfortunate Events and enjoyed some fun activities as they become familiar with some of the vocabulary.

Children in Year 5 have been learning about bridges as part of this term's topic. This week, they worked in groups and used what they had learned from the bridges workshop from the beginning of January to help strengthen their structures.

Some of our Year 4 and 5 children went on an adventure at Chalk Hills Academy today and made new friends with some of the children from Chantry Primary Academy. They had to use a range of navigation and geographical clues to solve clues around the school site and had a lot of fun!

Wow! We have some budding Monets in Year 5 - it's difficult to spot the real Monet among these paintings!

Some of our Year 5 pupils took part in a Food Technology session at Chalk Hills Academy today where they made their own biscuits with a Valentine's theme. We hope there were some left to share with their loved ones when they got home!

Children in Year 5 took part in a workshop today with the Bedfordshire Fire and Rescue Service. Children learned about fire, road and water safety from a Fire Safety Community Safety Officer. They tried out life saving activities and there was lots of opportunity for discussion and questions. The Fire and Rescue Service are keen to improve the safety of young people, especially Year 5 pupils as they become more independent, in our community by emphasising the dangers of playing near open water spaces, the importance of being safe around fire and the consequences of inappropriate behaviour on the roads.

Hawk class have been finding out about some of the children at Downside Primary School. They have exchanged information about each other's school and today they went to the Stockwood Discovery Centre to meet their new friends.

Children in Hawk class were amazed in the science lesson today when they saw skittles behaving like magic when they added water. Ask them what happened or why not try the magic for yourself?

Year 5 started the new term off wowing us with their bridge building skills. Starting with triangles, they went on to make pyramids and then used their problem-solving and team-building skills to make their own bridges. It was a great day and they are now ready for their forthcoming topic back in class.

Following the workshop, we are very proud to have received the following feedback from Martin at Architecture Workshops:

'I just wanted to say how impressed I was with your Year 5 pupils. They were polite and enthusiastic, demostrating superb listening skills focusing when required, a pleasure to work with and a credit to the school. There was one lad in the afternoon who led the 'winning' group, whose forward planning and 3D visualisation was the best I have ever seen in someone of his age in the 19 years I've been running the workshops'.

Children in Year 5 were out this morning watching a performance of 'It's No Joke!' which prompted some interesting and sensible discussion and questions.

As part of Luton Community Safety Partnership's Serious Violence Strategy, the Flavasum Trust together with Alternative Learning and Progression Service (ALPS) secured funding from the Home Office and Bedfordshire and Luton Community Foundation to pay for the Comedy School to perform ‘It’s No Joke!’, a play which uses comedy to explain the damage knives can do to the person carrying them, their friends and families, as well as to anyone unlucky enough to be a victim.

Peter Sinclair, Chair of Trustees of the Flavasum Trust said: “The rise in knife crime is causing everyone to worry, especially parents. Are our children safe when they go out? Who are they meeting? We can’t keep them indoors just because we’re scared they might be at the wrong place at the wrong time. That’s why the Flavasum Trust wants ‘It’s No Joke!’ a play about knife crime, to be seen by as many young people as possible.
“ ‘It’s No Joke!’ is a unique way to help school-aged children understand the dangers of carrying a knife and what they must do if they know someone is carrying one.”

Year 5 celebrated VE Day today as part of their Fantastic Finish. Here's a peek at some of the brilliant costumes and the children also to shared their work with their parents during the afternoon.

Year 5 have had a brilliant day today taking part in drama workshops with our friends from Oaklands College. Eagle class then enjoyed a performance of Percy the Penguin and the Quest for Flight, and Hawk class watched Bumble and Bee and the Quest for the Magic Flower. The children couldn't resist joining in with Baby Shark... 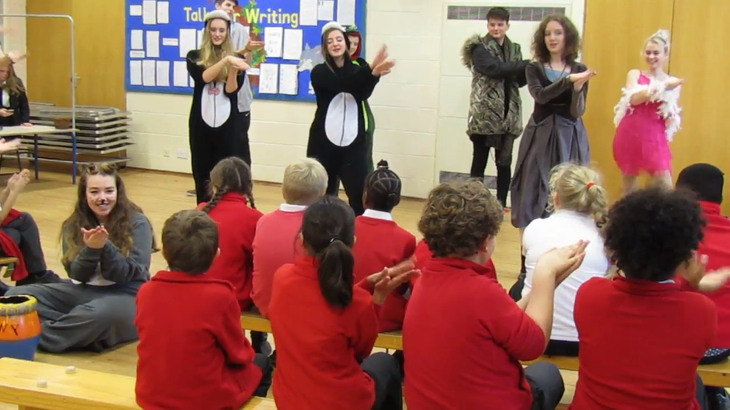 To start their work on the Second World War, Year have created some fantastic Blitz Artwork. The children tried hard to blend the colours using water colours.

In their science lessons, children predicted which solids would dissolve in water and which ones wouldn't. The solids were, salt, sugar, plasticine, sand, glitter, and flour. The sugar and the salt dissolved so the children learned they were soluble and the rest were insoluble. 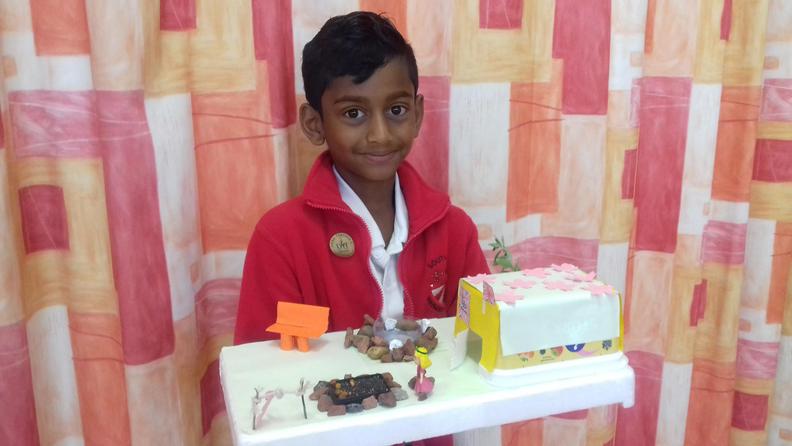 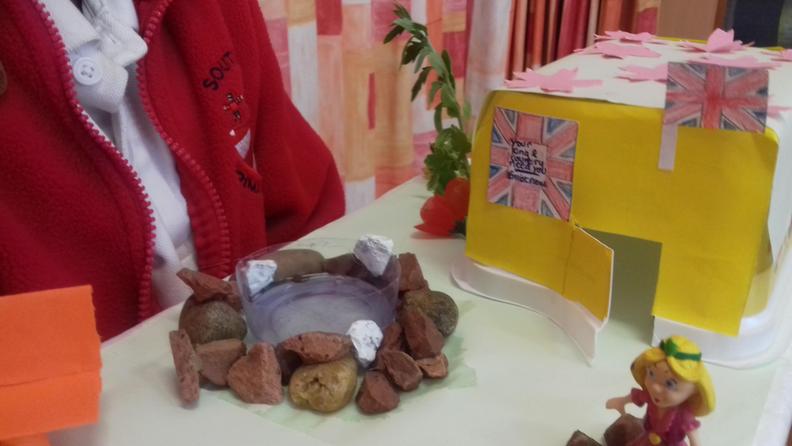 Children in Year 5 are currently studying the Second World War. We were delighted this morning with some of the creative homework projects that this has inspired.

Thank you to everyone who came along to our coffee morning on Tuesday 11th September - the children performed brilliantly and staff were able to share what we are covering over the course of the year. You also helped us to raise lots of money for Macmillan Cancer Care!